Today there is no doubt that the Twilight saga, the five films based on Stephenie Meyer’s books, has been a resounding success. Millions of young people and teenagers followed these vampires in each installment and fell in love with them. Now time has passed and each of its actors has chosen different directions.

We wanted to know what happened to them, what they have done over the years and what the most famous vampires look like today. Here he tells you their stories.

Although Kristen began acting as a child (at the age of 12 she was the daughter of Jodie Foster in Panic Room, and the success of the film opened the doors of Hollywood for her), it was her starring role in the Twilight saga that undoubtedly made it be recognized worldwide. Bella Swan falls in love there with the vampire Edward Cullen, played by Robert Pattinson, and brings this romance to real life, driving her fans crazy. During the saga, Kristen participated in another fantasy film: Snow White and the Huntsman, where she gave life to the naive princess.

Today, at the age of 30, the actress proves to be very far from the innocent Bella and Snow White and, although she achieved fame in a blockbuster movie, she never chose to lock herself in the stereotype of the Hollywood actress, successful and beautiful. And this is shown not only by her punk chic style, but also in the independent films that she chooses to star in. In recent years, she crossed the Atlantic to participate in the filming of Journey to Sils Maria, which earned her the César Award for best supporting actress.

She also worked with Woody Allen at the Café Society and even stepped into the shoes of Jean Seberg in the film that recounts her life, Watching Jean Seberg. Kristen’s way of acting has been associated with that of the controversial actress, and she doesn’t seem to dislike the connection. 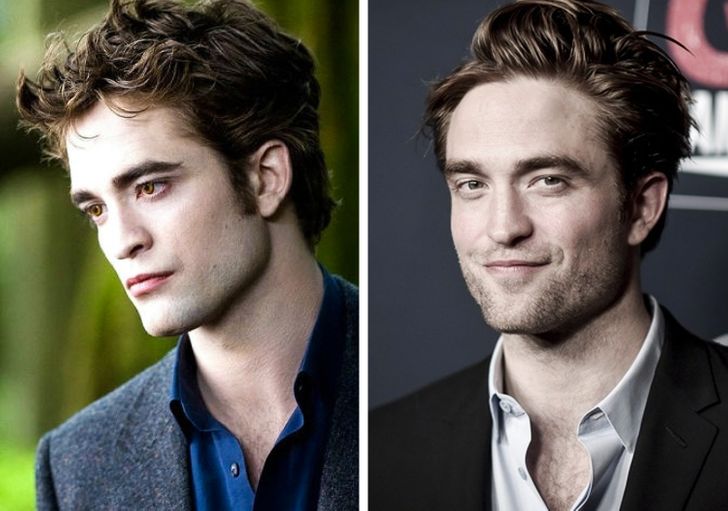 There is no doubt that his starring role in the Twilight saga led the actor to stardom. It was in that period that he became world famous and magazines that include celebrity lists, such as Times or Forbes, included him among the most influential and highest paid in the world. However, the English actor was already known at that time. At the age of 15, he began acting in the London drama club and was later cast as Cedric Diggory in the fantasy film Harry Potter and the Goblet of Fire.

However, despite having played these purely commercial roles, he always preferred the path of independent cinema. That is why the rest of his characters do not seem to match that of the vampire box office. After taking part in a few romantic dramas, he dodged big-budget movies and played controversial characters like the manipulative millionaire from Cosmopolis, as well as dabbling in horror and science fiction.

Pattinson even makes his own music and since 2015 has supported campaigns to protect children’s rights. This past year it was announced that he would become Gotham City’s dark vigilante. In January, he began filming The Batman; this film, directed by Matt Reeves, is expected in 2021. Apparently, he got caught up in the big screens again.

Shadows House anime will have 13 episodes
16 hours ago